Mothers
These are veterans from the war who has stepped back from the fighting but still play a pivotal part in the resistance. They are called Mothers and as a group they are responsible for the recruitment process: Finding those people who leave society in desperation to join the resistance, training them, assessing them, and handing them over to the faction the Mothers think will be the best fit.

Mothers come from all factions and can sometimes be called upon to mediate when factions within the resistance disagree or fight. They are also around as a support for the Sisters of all factions and Sisters may come to them asking for advice or simply seeking a shoulder to cry on.

The Mothers during this larp will have a twofold function. Ingame they will handle the rookies and give support to Sisters that need someone to talk to. Additionally, in a off-game capacity, Mothers will also be safety hosts. If a participant feels unsafe, physically or emotionally, or in need of support in any way they may go to the Mothers for help. Just start with the word “off game” and the Mothers will know it is a matter of real life need and not a in-game talk.

Rookies
In all social and economical classes and of all ages there will be people who just cannot stand the crushing weight of the patriarchy anymore. Sometimes it is a life changing event that drives them away, and other times it is just a slow realization that they need to fight the system, at any cost. Somehow they find a way out and get in touch with the Mothers. With the Mothers they will receive a couple of weeks of basic training in warfare. During this period the Mothers will also assess the rookies to see if they are strong enough to be warriors and, if so, what faction would be the best fit for that rookie. 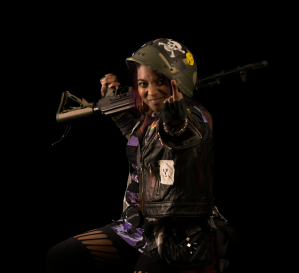 Rookies get divided into Sororities: small groups of a handful of rookies that do their basic training together. This tough period will create a lifelong bond between the members of a sorority. Even after they get sorted into different factions that bond will still be there.

At the larp the rookies will start separate from the Sisters. In the first section of the game rookies will have the opportunity to play within the sorority and the focus will be on the hopes and fears of what is to come.

Hangarounds
In the wake of any large group of resistance fighters there will be hangarounds. Around the armies in the medieval times there were lots of civilians, families and artisans that cooked food, made equipment and patched up the soldiers without actually being part of the army itself. Around the suffragette Sisters there are small groups of people that will support the factions with similar practical help. These might be former rookies that didn’t made the cut, outcasts or outlaws or just people that wants to assist the resistance but doesn’t have what it takes to be a fighter.

During the larp there will be some hangarounds, played by the crew and volunteers that makes the Fight Like A Girl larp. Participants playing Sisters or Rookies may interact or play with hangarounds, but since hangarounds have a lot of off-game responsibilities they cannot be dragged into long and complex gameplay.